Third step of the 5 v 5 + goalkeepers progression: the players are now involved in a real possession game where just the first part is carried out without pressure and a second part where the counterattacks are alternated with positional attacks.

The coach decides the team in possession and the defending team to create situation of playing out from the back and of quick finishing.

The development of the game take to play counterattacks after the recovery of the ball and a positional attacking phases too; always alternating  3 v 2, 2 v 3 duels, with numerical advantage and outnumbered situations. 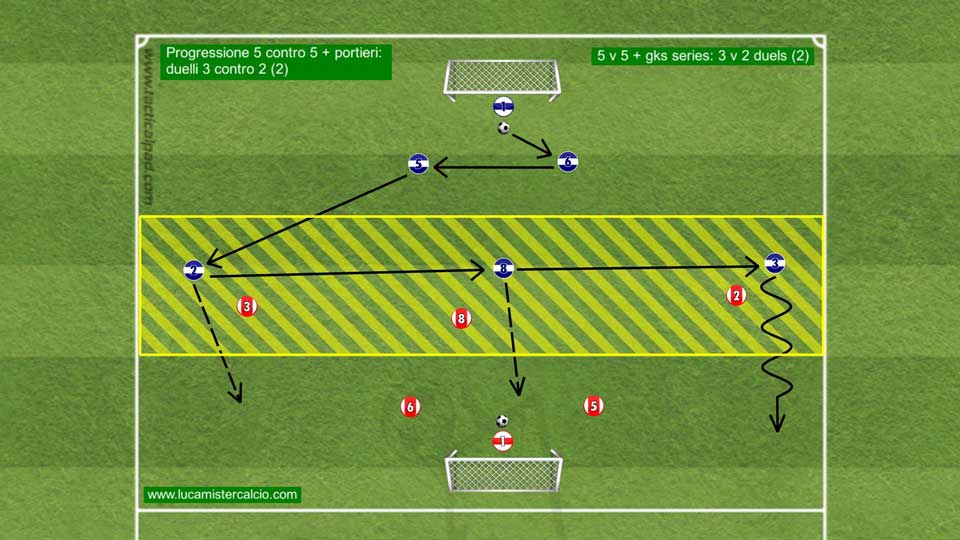 6 players for each team are placed inside a rectangular set-up that is divided again into 3 areas; 2 goal areas and 1 center area, where each team is placed with 1 goalkeeper, 2 players in the goal area and 3 center area.

Both goalkeepers are in possession of the ball and the coach decides who is the one who has to start the moves; this way a team is in possession, the other is defending.

The goalkeeper passes the ball to the defenders and they must send it toward the 3 team mates in the center, after a passing combination between them.

The center players must attack the goal, playing out freely, and finish the move after a cross pass or a killer pass in the final third, playing 3 v 2 defenders and the goalkeeper.

If the defenders win the ball or the goalkeeper saves, they can pass it toward the forwards to counter attack on the other side, playing again 3 v 2.

The goalkeeper who didn’t start the exercise play a second ball to the defenders to build up outnumbered 2 v 3 and to send the ball toward the forward to finish a new move 3 v 2 inside the opposition final third.

SECONDARY OBJECTIVES:
Build up from the back, Goal defense, Counter attacks, Positional attacks 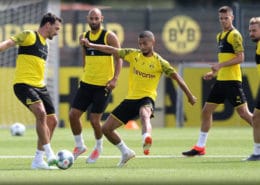 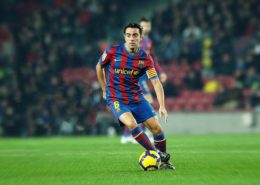 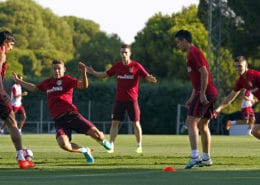